November 6 ~á Use Your Head and Heart The White House: An Illustrated Tour

"To handle yourself, use your head; To handle others, use your heart. Anger is only one letter short of danger." ~ Eleanor Roosevelt 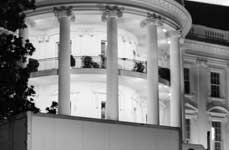 Eleanor Roosevelt was a beloved First Lady whose wisdom inspired others to use their head... and heart.

At his 1877 inauguration, Rutherford Hayes called his wife "the First Lady," coining the term for generations to come. In 1911, a play about successful hostess Dolley Madison titled The First Lady made the title even more popular.

More than just the White House hostess, the President's wife has evolved into the country's versatile, vital resource. Campaign assistant, public relations asset, advisor, AND the coordinator of the 132-room mansion, she's in the public eye and can change the nation, perhaps even the world.

Our most recent First Ladies have worked hard to make a difference. With the Let's Move! campaign, Michelle Obama helped find solutions to the problems of childhood obesity. Her Joining Forces initiative supported military families.

Laura Bush dedicated herself to advancing education. High-profile attorney Hillary Clinton worked heartily on children's rights. Barbara Bush fought for family literacy and advised, "Believe in something larger than yourself."

Nancy Reagan appealed to students to "Just Say No" to drugs, alcohol, and tobacco. The slogan became a cultural phenomenon.

Rosalyn Carter shared in her husband's decision-making and spoke out on mental health and human rights.

Betty Ford actively celebrated the Equal Rights Amendment, helped the handicapped, and proclaimed, "Don't compromise yourself. You are all you've got." Mrs. Ford's cultural exchange programs were described as having "done more to cement (foreign) relations...than all the talk of diplomats."

Pat Nixon was an international ambassador of goodwill and encouraged women to have regular mammograms. Lady Bird Johnson spearheaded strong cleanup campaigns along highways and Jacqueline Kennedy glimmered with Úlan and extraordinary dignity.

"Any committee is only as good as the most knowledgeable, determined, and vigorous person on it," said Mrs. Johnson. "There must be somebody who provides the flame."

Often the flame has been married to the President of the United States.

Reach out to others with your heart.