January 9 ~  Reward in Itself Kindle: Feminism

"Defending the truth is not something one does out of a sense of duty or to allay guilt complexes, but is a reward in itself." ~ Simone de Beauvoir

A passionate defender of truth, writer Simone de Beauvoir (1908-1986), "the mother of feminism," was born on this day in Paris, France to a devout Catholic family. She spent her life celebrating the equality of the sexes.

"One is not born a woman, one becomes one," she wrote in the opening line of her two-volume masterpiece The Second Sex (1949), a call for freedom from female oppression that gained immediate international success. The book fueled Betty Friedan's quest for feminism.

Beauvoir hypothesized that women's limitations in society stemmed from the notion that maleness was "normal" while femaleness was "different."

"The writer of originality, unless dead, is always shocking, scandalous; novelty disturbs and repels," she said.

Beauvoir was educated at the Sorbonne, where she met her romantic and intellectual partner of over 50 years, John-Paul Sartre. With Sartre, she became a leader in freedom of thought and existential philosophy. She was a passionate rebel, with an indomitable, bold spirit.

"Old age is life's parody," she observed and believed that "there was no divorce between philosophy and life."

Supporting herself as a teacher and writer, in 1965 she wrote the remarkable A Very Easy Death. The deeply-personal novella is a moving recollection of her 78-year-old mother’s illness and death from cancer, and is perhaps one of the earliest memoirs of family care.

"One's life has value so long as one attributes value to the life of others, by means of love, friendships, indignation, and compassion," she said. 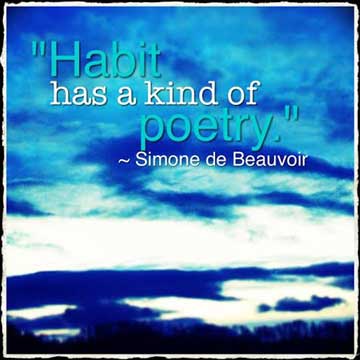 Truth is its own reward.