June 21 ~  Details of Victories Sartre by Himself

"Once you hear the details of a victory, it is hard to distinguish it from a defeat."
~ Jean-Paul Sartre 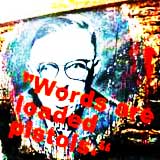 For philosopher and writer Jean-Paul Sartre (1905-1980), victory and defeat were a blur of historical angst. Words were his passion.

Born on this day in Paris, he described his writing to be a response to childhood experiences of rejection.

"Words are loaded pistols," he claimed.

Young Sartre learned about the power of the written word from his grandfather, a professor of German. "I have to realize the meaning of the world and of my essence: I decide it alone, unjustifiable, and without excuse."

His nine month imprisonment during World War II shaped Sartre's Existentialism philosophy which celebrated resistance, quiet self-preservation, and the freedom of the individual. Humans, he believed, were not in a state of being, but in a constant state of becoming.

The paradox of Existentialism is that eternal oppression frees the inner person to make daily decisions. "We were never more free than during the German occupation," he wrote in The Republic of Silence.

"Because an all-powerful police tried to force us to hold our tongues, every word took on the value of a declaration of principles."

Sartre's violent, famous play No Exit (1944) featured three characters locked in hell and lamented the constant struggles of relationships with the thought-provoking line, "Hell is other people."

"Life begins on the other side of despair," he wrote, winning the 1964 Nobel Prize for Literature with his autobiography Les Mots (Words).

He declined the award and said, "A writer must refuse to allow himself to be transformed into an institution."

Perhaps just another of his blurred visions, distinguishing victory from defeat.

The heart can muster dignity in good times and bad.