"Take pleasure in your dreams; relish your principles and drape your purest feelings on the heart of a precious lover." ~ Giotto di Bondone

With life-like realism that heralded the art of the Renaissance era, Giotto di Bondone (1267ľ1337) was a visionary painter and architect. He was born poor in a small village near Florence, Italy.

The legend goes that as a young boy he tended sheep and his realistic drawings were discovered by the then well-known artist Cimabue. The young shepard then became Cimabue's apprentice.

Giotto once said, "Every painting is a voyage into a sacred harbor."

Unlike the flat, iconic images of the Byzantine period, Giotto created three-dimensional paintings, a remarkable innovation for his time. He created pure light.

Somehow capturing the emotions of his subjects, his paintings glowed with realism and passion. He gave new freedom and meaning to the evolution of art.

"The sincere friends of this world are as ship lights in the stormiest of night," he said.

An inspiration to Dante Alighieri, Michelangelo, Oscar Wilde, Robert Browning, and others, Giotto's final project included the design of the Cathedral belltower in Florence completed after his death. This 270-foot Giotto Tower gives visitors today an unforgettable 360░ panoramic view of his beloved city.

He said, "The human heart is as a frail craft on which we wish to reach the stars."

Open your heart to joy! 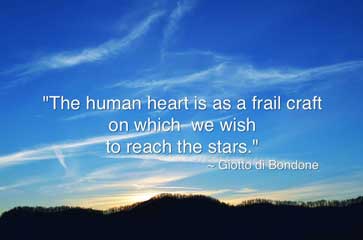