"They always say that time changes things, but you actually have to change them yourself." ~ Andy Warhol

Unique pop artist Andy Warhol was born Andrew Warhola (1928-1987) on this day in the steel town of Pittsburgh, Pennsylvania, the youngest son of Czechoslovakian immigrants. Warhol celebrated innovative artistic expression and the idea of life as an art.

"I am a deeply superficial person," said the outrageous Warhol, who began his career as a commercial artist.

With a passion for popular culture and style distinctly his own, he worked from his studio, the Factory, silk-screen painting identical, mass produced images on canvas, then altering the colors to give each print a different look.

"If everyone's not a beauty, then no one is," he said.

Also known for his paintings of Campbell soup cans and Marilyn Monroe, Warhol was an enigma who once said, "I'd prefer to remain a mystery. I never like to give my background and, anyway, I make it all up different every time I'm asked."

"They say that time changes things, but you actually have to change them yourself," he observed and was a vibrant part of the late 1970s Studio 54 New York club scene. His most famous line, "Everyone will be famous for fifteen minutes" has become a cultural standard. 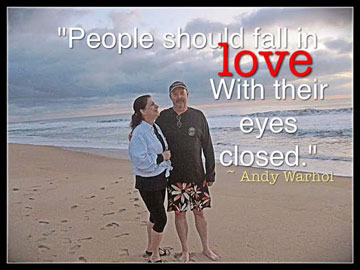 Change what needs to be changed.